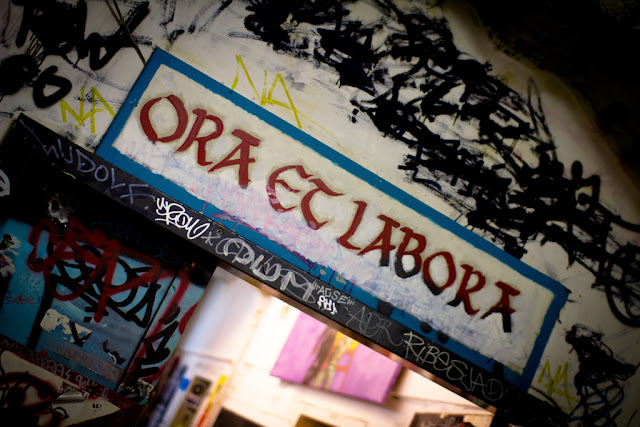 The Principalities and Powers Are Real
I have a confession to make: I believe in the Devil. I believe in Satan, in Beelzebub, whose name means “the Lord of the Flies.” I believe in demons and unclean spirits. I believe with the Apostle Paul that we must put on the full armor of God, that we must equip ourselves with all of the resources that God has made available to us through the Holy Spirit, “For our struggle [in this life] is not against flesh and blood,”—No, it is “against the rulers, against the authorities, against the powers of this dark world and [it is] against the spiritual forces of evil in the heavenly realms” (Eph 6:11–12). How’s that for the beginning of a sermon?
Now I know that believing in the existence of demons and the Devil is not particularly popular in today’s scientific world. In fact, there are even many Christians “who have a lot of doubts about things like demon possession and exorcism.”[1] As theologian Walter Wink once wrote, “Demons… are the drunk uncle of the twentieth century: we keep them out of sight.”[2]

That being said, I am not superstitious. I don’t believe that demons are under every rock and around every corner, but they are around some corners and under some rocks. Nor do I believe that evil spirits are responsible for every bad thing that happens in this world. We do have to be discerning… because we all know the evil and violence that we are capable of once we have declared some person or some group as evil or demonic.
Nevertheless, such legitimate concerns should not cause us to close our eyes to the reality that there are spiritual forces operating in the world,… dark forces that press down upon us—as individuals and even as whole societies—dark forces that tempt us, taunt us, and demoralize us; forces that yell at us, and whisper to us.[3] Like a virus, these malignant forces work tirelessly to mold us, to break us, to squeeze the very life out of us by cultivating a whole host of fears and hatreds that disconnect us from God, from ourselves, and from one another, especially from those who are different from us.
Like the wind, these forces, which are allied against humanity, are invisible to the naked eye, but we can feel their effects all around us, in all human arenas—in politics, in economics, in entertainment, in religion, even at a nightclub in Orlando, Florida. 421

We are Legion
Orlando… that’s what came to mind this week as I read and reflected on today’s gospel reading.  It’s a familiar story, this encounter between Jesus and the Gerasene demoniac. It takes place right after a not-so-uneventful journey on the Sea of Galilee.[4] Immediately before today’s episode, Jesus and his disciples embark in a boat. They cross over from their familiar Jewish homeland to the country of the Gerasenes, which is located in foreign Gentile territory. During their voyage, a wild storm arises that threatens to capsize their boat. The disciples fear for their lives, but Jesus miraculously calms the storm with just a few words. Actually, to be more accurate, Jesus rebukes the wind and the waves in the exact same way that he rebukes demons. And so, Jesus isn’t simply exercising his power over the impersonal forces of nature, he is confronting the demonic. And so, the so-called “Stilling of the Storm” is better understood as massive exorcism on a grand scale, one that anticipates Jesus’ exorcism of Legion in today’s episode.
And so because of Jesus, the boat arrives safely. But as soon as he disembarks, he is met by a very disturbed man, and man who is possessed not by one demon, not even by two or three demons, but by many demons. “What is your name?,” Jesus demanded. “My name is Legion for we are many” (Mark 5:9).
And because he is Legion, look at what has become of him.[5] This poor man is marginalized, cut off from society. And so, he is isolated, antisocial and uncivilized, and he frequents wild places. Like a zombie, he dwells among the tombs; he sleeps in cemeteries surrounded by the spirits of the dead. The demonic forces that possess him are very powerful. He has absolutely no control over his actions, and nothing is able to restrain him for any length of time. He is a danger both to himself and to society. He spends his days and nights howling and cutting himself with stones.
This week, as I read and reread the detailed description of this man’s condition, all I could think was, “This is who we are. We are Legion. Our nation, our society, … we are Legion.” We are possessed by a multitude of very powerful forces, forces that exhibit a tremendous influence over us, forces that we have been unable or unwilling to restrain: radical individualism and rampant consumerism; preoccupation with image rather than character; unfettered racism and prejudice. We feel out of control, and we are possessed by so much fear and so much hatred, that we howl with bigotry and we cut ourselves with guns. We are oppressed by the devil; we are Legion; and we need to be set free.  882

Ora et Labora
This week as I listened to the news, as I sat in silence and reflected on all the tragedy in Orlando, I came across some reflections by a United Methodist minister in Pennsylvania. His name is Dan Lebo, and he writes:

With this most recent shooting we have seen the outpouring of “thoughts and prayers” from world leaders, celebrities, and everyday people like you and me for the victims and families of this present iteration of senseless violence and hatred. We have also witnessed an outpouring of those frustrated with “thoughts and prayers,” who wish to see action instead.     As I try to wrap my head around [yet] another shooting… I try to find words to understand. Words like tragic, terrifying, incomprehensible, evil, and infuriating all come to mind. As a pastor, what am I supposed to say to church members? As a person of faith, what should I say to myself?[There is a Latin phrase that has been used by Benedictine Monks for centuries.] The phrase is Ora et Labora, it means “Pray and Work.” Essentially it’s a reminder that the life of faith is one of contemplation and action.We pray because we recognize that the forces we confront in these acts of hatred, evil, and violence are far beyond our ability to face alone. We pray to make sense of the senseless. We pray because we know that without God we don’t stand a chance. We pray because we know that death can only be defeated with resurrection. We pray for comfort for those who are afflicted—be they victims, families of victims, victims by association, or the countless onlookers across the world who are heartbroken and feel helpless.We also pray for courage to stand up and speak out against atrocity and all that we know in our hearts to be wrong. We pray for wisdom and understanding to seek the best way forward and to resist the urge to write off entire populations of people because of what those who distort the message use it for. We pray for our hearts to break further so that we no longer accept these events as something to expect.     But we also work. We work because prayer does not remove our responsibility to act. Rather, prayer inspires us to act, to be co-laborers with God in our efforts to bring the kingdom on earth as it is in heaven. God has called us to be agents of change. God has called us to be proclaimers of peace. God has called us to be prophets of justice. God has called us to be people who cling to mercy and love and life when facing the principalities and powers that would seek to tear us apart.     We are a people who believe that thoughts and prayers are important, even essential, but are never enough. Ora et Labora. Pray and Work. Pray for an end of violence and hatred. Work for an end of violence and hatred. Pray for a brighter tomorrow. Work for a brighter tomorrow.
Pray because we can’t do it without God.
Work because God won’t do it without us.   1409

The Prayer of St. Francis
So if we have been called to pray and to work, where do we begin and what might that work look like? Let me offer a prayer that also outlines the work that God has called and equipped us to do, work that will help us develop the habits and virtues that are necessary to set us free from the legion of demons that possess and oppress us. It’s the Prayer of St. Francis.

Peace... Love... Forgiveness... Faith... Hope... Light... Joy...  These are what we need to cultivate. These are the armor of God of which Paul speaks. These seven things are our liturgy, our work.

[1] Richard Beck, Reviving Old Scratch: Demons and the Devil for Doubters and the Disenchanted, 4.
[2] Walter Wink, Unmasking the Powers, 41.
[3] Language pulled from Reviving Old Scratch.
[4] It is recorded in all three Synoptic gospels, although in Matthew, Jesus encounters two demoniacs.
[5] Listen to the description of this demon-possessed man’s condition as recounted by both Luke and Mark.