"God, I Don’t Believe You Exist, But We Really Need to Talk."

From Third Person to Second Person; The Grammatical Shift of Faith

Falling Trees, Empty Woods
We have all heard that deepest of deep philosophical questions, you know the one about falling trees and deserted forests. “If a tree falls in the forest and no one is around to hear it, does it make a noise?” You wouldn’t believe how many responses there are to this question on the internet. Lots of people said, “Yes.” Lots said, “No.” And a fair number of people argued that it all depends upon your definition of sound. Others simply said that it was a stupid question.
My favorite response is from the guy who wrote, “Does it make a sound? If you really want to know, set explosives to the trunk of a tree, activate a decent quality recorder, and explode the tree. Play back the recording and let me know whether you hear the tree say ouch or not.” When I read that, I had a mental image of a tree lying on the forest floor, crying out: “Help, I’ve fallen, and I can’t get up.” 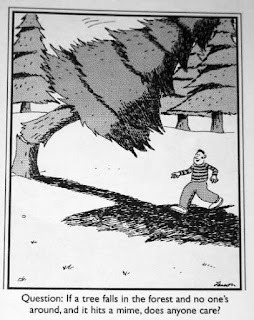 Instead of answering the question, some people modified the question. So for example, Gary Larson, the famous originator of the Far Side cartoons, asks this question: “If a tree falls in the forest and no one’s around and it hits a mime,… does anyone care?”
So I wonder, how would you answer the question? Or, what alternative question would you come up with? Or better yet, what question would the author of today’s psalm come up with? Today, we recited Psalm 77. It’s a psalm of individual lament, a psalm in which a lone voice cries out to God. But you may have noticed that we only recited verses 1 through 2 and 11 through 20; that’s because those were the only verses assigned by our lectionary. So what we ended up with was the good parts version, the sanitized version. And what we missed was the depth of despair that the psalmist expresses. But let’s look at that distress in a little more detail. If you want to follow along, I would invite you to turn to page 693 in the Book of Common Prayer.

Notice how the psalmist begins on a note of confidence. “I will cry aloud to God; I will cry aloud, and he will hear me.” But then notice how in verse 3, the psalmist begins talking about being restless and unable to sleep or speak. Clearly, the psalmist’s experience of God isn’t living up to their initial confidence. This finds expression in the litany of questions beginning in verse 7:
7   Will the Lord cast me off for ever? *
will he no more show his favor?
8   Has his loving‑kindness come to an end for ever? *
has his promise failed for evermore?
9   Has God forgotten to be gracious? *
has he, in his anger, withheld his compassion?
10   And I said, “My grief is this: *
the right hand of the Most High has lost its power.”

I like Eugene Peterson’s translation of this psalm in The Message.
2–6     I found myself in trouble and went looking for my Lord;
my life was an open wound that wouldn’t heal.
When friends said, “Everything will turn out all right,”
I didn’t believe a word they said.
I remember God—and shake my head.
I bow my head—then wring my hands.
I’m awake all night—not a wink of sleep;
I can’t even say what’s bothering me.
I go over the days one by one,
I ponder the years gone by.
I strum my lute all through the night,
wondering how to get my life together.

7–10   Will the Lord walk off and leave us for good?
Will he never smile again?
Is his love worn threadbare?
Has his salvation promise burned out?
Has God forgotten his manners?
Has he angrily stalked off and left us?
“Just my luck,” I said. “The High God goes out of business
just the moment I need him.”

The psalmist is in deep despair. Forget about falling trees and empty woods, the real question is this: If I cry out to God and I don’t hear an answer, does that mean that God doesn’t exist? Or worse, if I call for help and all I hear is the sound of my own voice echoing back, does that mean that God is angry with me, that God is fed up and has turned his back on me? These are the questions that the psalmist is asking, the same questions that we have asked at some point in life, whether or not we had words for them. In fact, that is one of the greatest gifts of the psalms. The Book of Psalms is often called the prayer book of the church, in part because the psalms give voice to our deepest fears and sorrows, our greatest joys, and everything in between. When life is hard, and we don’t know what’s going on, when we don’t even have the words to express ourselves, we can turn to the psalms. The psalms don’t necessarily solve our problems, but they can bring a measure of relief by giving voice to our experience. After all, one of the greatest human needs is the need for empathy, the need for understanding, and the psalms can provide that for us.
But returning to the psalmist’s questions, what do we do when we are experiencing a crisis of faith? When it seems that God doesn’t exist, or worse that God has abandoned us, where can we turn? To whom can we go?

“God, I don't believe you exist, but I think we really need to talk."
Recently I heard an interview with a Michael Jinkins. Jinkins is an ordained minister in the Presbyterian Church. He has served congregations in both Texas and Scotland. He is also a seminary professor, and he has written some books on theology, one of which I used for a course I taught at Friends University on “Basic Christian Beliefs.” In the interview, Jinkins recounts a crisis of faith that he experienced back in the mid-80s, back when he was serving as a pastor in Aberdeen while he pursuing a Ph.D. in theology. He says,

“I had gotten to a place where my faith was cold,… I don’t think I believed much in God. It wasn’t so much just intellectual, it was just kind of a coldness that I’d come to.”

He recalls returning home after a day of pastoring. He walked in, threw his collar on the bed and said to his wife, “Debbie, I don’t believe in anything anymore.” And she said, “I know. I can tell.” He said that he had come to a point where things just didn’t add up anymore, and so he began to explore other vocational options. During the summer, he went down to England to the University of Durham for a summer program in literature and history. And two things happened that lead him back to faith.
The first thing happened on the day he arrived. He was moving into his dorm room. He was by himself, and nobody knew that he was a minister. And he was putting his bags away, when he heard someone crying out on the stairwell. He became curious, and so he opened the door to the stairwell and stuck his head around. Sitting on the stairs, was a very young woman, one of the cleaning ladies. She was weeping. Jinkins sat down next to her, and asked her what was wrong. There was an illness in her family, and so he listened while this distraught young woman poured her heart out to him. He asked her if she would like pray, and she said, yes. And so he prayed for her. Then, when he got back to his room, he said to himself, “Now what the heck is going on here. I’m not sure I believe in God and yet I find myself drawn into a pastoral relationship that was the most natural thing in the world.” That was the first incident.
The second was related to one of the literature classes he was taking. They were studying the plays of Shakespeare, and the class kept getting stuck. An important part of understanding Shakespeare is understanding his views of faith and God. But the class continually resisted this dimension of Shakespeare, and Jinkins found himself frustrated. He wasn’t happy with this life either, a life that in his words, “lacked transcendent reference,” a life in which God didn’t figure. And so one day, he is walking down the street. He is passing by Durham Cathedral, and he finds himself entering the cathedral and kneeling down to pray. And this is the prayer he prays: “God, I don’t believe you exist, but I think we really need to talk.”
What a prayer! “God, I don’t believe you exist, but we really need to talk.” What irony; speaking to the One he didn’t even believe was there to hear him! Yet, this is exactly what the psalmist does. Look back at Psalm 77. In the first half of the psalm, the psalmist speaks of God in the third person. That is, the psalmist speaks about God. But in the second half, the psalmist shifts into second person, and speaks to God. This shift occurs in the middle of verse 11. The psalmist goes from “I will remember the works of the Lord” to I will “call to mind your wonders. I will meditate on all your acts and ponder your mighty deeds. Your way, O God is holy. You are the God who works wonders.” Not only has the psalmist moved from questions of despair to recounting the times in the past when God has been faithful and responsive to his people’s needs, but the psalmist has also made the important shift from talking about God, to talking to God. And that is the shift that is most needed. This is the paradox and irony of faith. This is what it means to step out in faith to express our fears over God’s felt absence and then to pray and act as though God is present. This is what the psalms teach us to do.
So befriend the psalms. Become intimately equated with them. Not just the psalms of lament, but the psalms of joy and thanksgiving as well. But for today it is enough to speak to God from a place of crisis, anxiety, and despair.

God, I don’t believe you exist, but I think we really need to talk.
God I don’t think you are listening to me, but hear me out.

Email ThisBlogThis!Share to TwitterShare to FacebookShare to Pinterest
Labels: Sermon