Frog and Toad and the Kingdom of God

Doing Our Part and Letting God Do God’s Part

Today’s gospel lesson comes from the fourth chapter of Mark. Up to this point in the narrative, Jesus has been announcing the arrival of God’s kingdom, “Repent,” he would say, “for the kingdom of God has come near.” In other words, “Take notice, God’s kingdom is taking over this broken world; and God demands your allegiance. This is good news.” And Jesus demonstrated the presence of God’s kingdom with powerful words and powerful deeds. He preached with an authority that astounded the crowds; he expelled demons with just a word; and he healed the sick with just a touch. People were amazed. But not everyone saw these things as evidence of God’s kingdom at work. As we heard last week, Jesus’ own family thought he was mental unstable and the scribes claimed he was possessed by Satan.

So Jesus began to be more careful; he began to operate more covertly. For example, instead of speaking about God’s kingdom in plain language, he began to cloak the gospel in little stories that we call parables. Jesus hid the kingdom from plain view so that it might have a better chance to get behind people’s natural defenses. In other words, Jesus used parables as a way to smuggled the gospel behind enemy lines. He hid the kingdom, so that the kingdom might be revealed. As he himself said, “There is nothing hidden, except to be disclosed; nor is anything secret, except to come to light” (4:22). He hid the kingdom to reveal the kingdom. This may sound absurd, but this is exactly what every farmer and gardener does. This is what we do. We hide seeds in the earth precisely so that they will come to light. If we didn’t hide seeds in this way, we would never experience harvest.

In today’s gospel, Jesus tells two parables about seeds and sowers to reveal something about the kingdom of God. Note that in both parables, someone plants a seed, and then what happens with the seed is completely out of their control. For example, in the first parable, a farmer plants a seed, and then he goes about his normal life. And despite his lack of attention and effort, the seed grows.

Frog and Toad, “The Garden”

This reminds me of a story that I read as a kid and that I like to read to my kids now. It is a story about Frog and Toad. Have you ever heard these stories. If you haven’t, Frog and Toad are good friends, very good friends. And if you read their stories, you soon discover that Frog is the sensible one, and Toad, not so much. 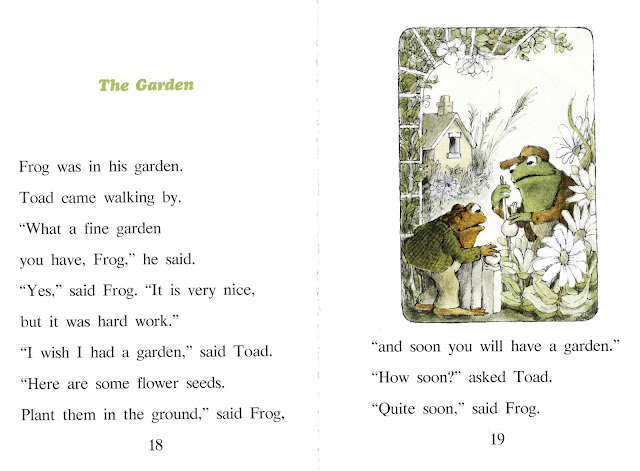 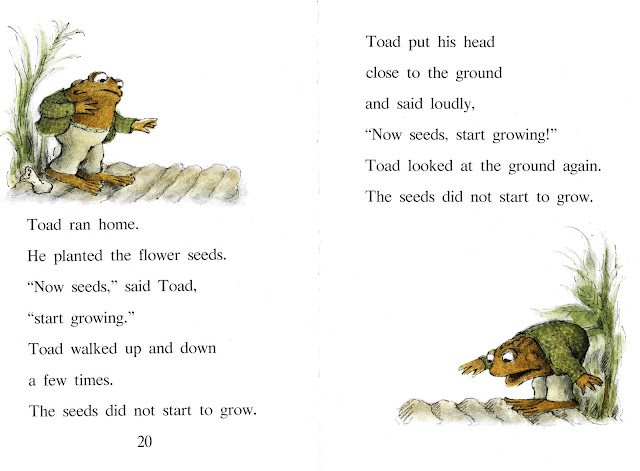 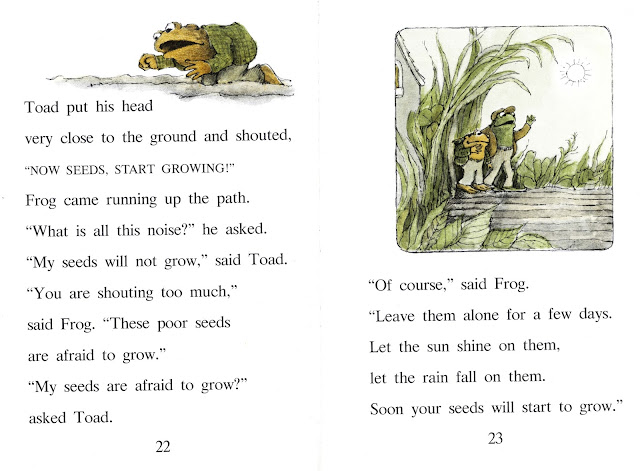 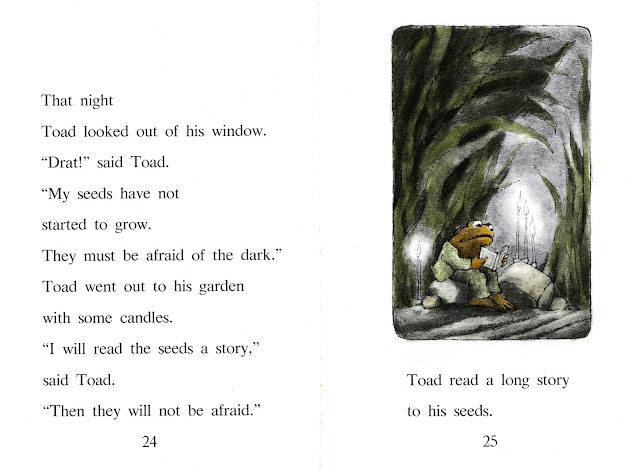 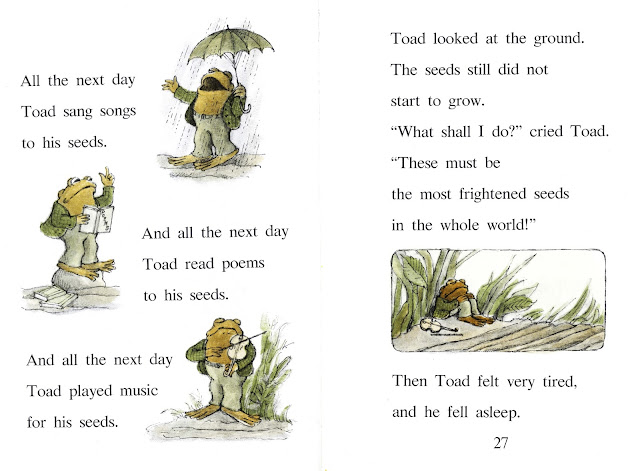 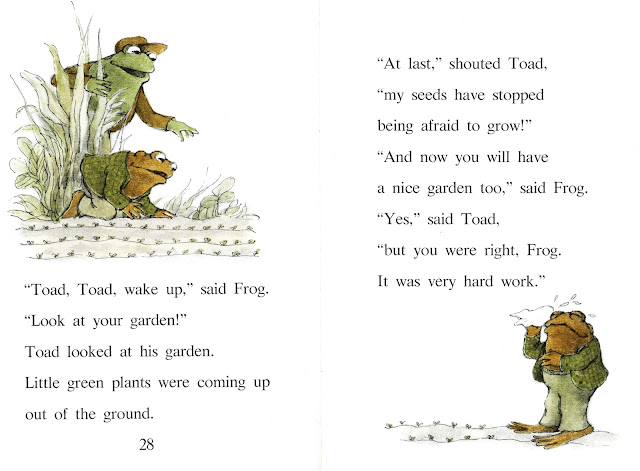 This story offers a perfect contrast to Jesus’ parables. Toad went through a lot of effort to get his seeds to grow, but as we all know, other than the act of planting the seeds, nothing Toad did contributed to their growth. With this in mind, let us return to Jesus’ parables.

I think Jesus’ parables teach us a few things about the kingdom of God. First, they tell us that there is a mystery to how the kingdom of God operates in this world. The kingdom is often hidden, not obvious. It grows secretly, and so it requires our patience and trust. Second, Jesus’ parables tell us that we have role to play in God’s kingdom, but it is an important role, but a limited role. We participate in the growth of God’s kingdom, but the growth of God’s kingdom does not depend upon us.

But let’s be clear, we do have to do our part, for if we don’t plant the seeds of the kingdom, it will not have a chance to sprout and grow. So we must also do our part, so that God can do God’s part.


So What Is Our Part?... Intercessory Prayer

So what is our part? If we work alongside God in establishing the kingdom of God, what does that work consist of? We could talk about a lot of things, but today, I would like to focus on prayer, especially intercessory prayer.

I have to confess. Throughout much of my life, I have struggled with intercessory prayer. I have so many doubts and questions when it comes to praying for other people. Does prayer really work? If so, how? For prayer to be effective, how much do we need, and what kinds of prayers work best? What can we expect when we prayer?

These sorts of questions that have been on my mind of late. So this past week on Wednesday, when I sat down for my devotions, I opened up my journal and wrote two questions: “Lord, what is intercessory prayer?” and “How do you want us to pray for other people?” And God—who knows me only too well—brought a book to mind. The book was Prayer: Finding the Heart’s True Home by Richard Foster. I pulled the book off my shelf and saw that it had a chapter on Intercessory Prayer. The chapter opened with these words: “If we truly love people, we will desire for them far more than it is within our power to give them, and this will lead us to prayer. Intercession is a way of loving others” (191). I began reading it, and right before I finished the chapter, the intercom buzzed. Someone was at the back door of the church looking for assistance.

“I Want to Get Better”

I went to the door and invited him in. I sat down with him and listened to his story. He was needing help with an electric bill because his electricity had been shut off two months ago. He was on living on disability due to a multitude of health problems. He had undergone multiple rounds of chemotherapy for colon cancer, liver cancer, and most recently lung cancer. A portion of his colon had been removed as well as half of one of his lungs, so he required a breathing machine. He really needed to be on the machine for hours every day, but without electricity, this wasn’t possible. For the past two months, he had been going the hospital every other day to use one of their breathing machines. But this was not adequate for his condition, so he was trying to raise enough money to get his electricity turned back on. He had been to the Salvation Army and Center of Hope, and both agencies had agreed to contribute funds. So he just needed a little bit more, and was hoping we could help. He had a letter from his doctor confirming his story, so I was quite happy to make a contribution from our Doorstep Fund. He was overjoyed.  That was the easy part.

Now came the hard part. I thought to myself, “I should really offer to pray for him, but what exactly would I say? What could I pray for, and would it change anything? I mean, he’s still going to be on disability. He’s still going to have insurmountable health problems.” In my mind, any prayer I might offer seemed like a mere drop in the bucket of his needs. This is the struggle I go through almost every time I meet with one of our Doorstep clients. But I couldn’t very well not offer to pray for him. Not on that day; not after I had just asked God how to pray for people and God had led me to a book. So I somewhat tentatively asked him, “Is there anything you would like me to pray with you about?”

Suddenly, he got very still. His eyes began to glisten, and he stared straight ahead. A few tears started streaming down his cheeks. After a moment, he turned to me and said, “I want to get better.” So I prayed with him. I prayed that he would get better. But will he get better? I don’t rightly know; only God knows. But here is what I am learning.

Praying is like sowing seeds. We scatter seeds here and there, and then we go about our daily lives. We go to bed at night and we get up in the morning, and the world doesn’t seem much different from day to day. And yet, quite independently of us, the seeds of prayer sprout and grow. We know not how, and we often don’t even get to see the results. But that is God’s business, not ours. God calls us to pray for others, and while our prayers can feel as small as a mustard seed, we must never forget that a mustard seed has everything it needs to become as big as a shade tree. It doesn’t get its potential from us, from we who pray. It gets is power and potential from God, the one to whom we pray. For when we pray, we are bringing God into the situation and that is more than sufficient.

Holding Up the Sky!

One day an elephant saw a hummingbird lying flat on its back
on the ground. The bird’s tiny feet were raised up into the air.

“What on earth are you doing, Hummingbird?” asked the elephant.

The hummingbird replied, “I have heard that the sky might fall today.
If that should happen, I am ready to do my bit in holding it up.”

The elephant laughed and mocked the tiny bird.
“Do you think those little feet could hold up the sky?”

“Not alone,” admitted the hummingbird.
“But each must do what he can. And this is what I can do.”[1]

Sometimes praying feels like we are holding up the sky all by ourselves.


Our Prayers Do Make a Difference