We Have This Treasure in Clay Jars 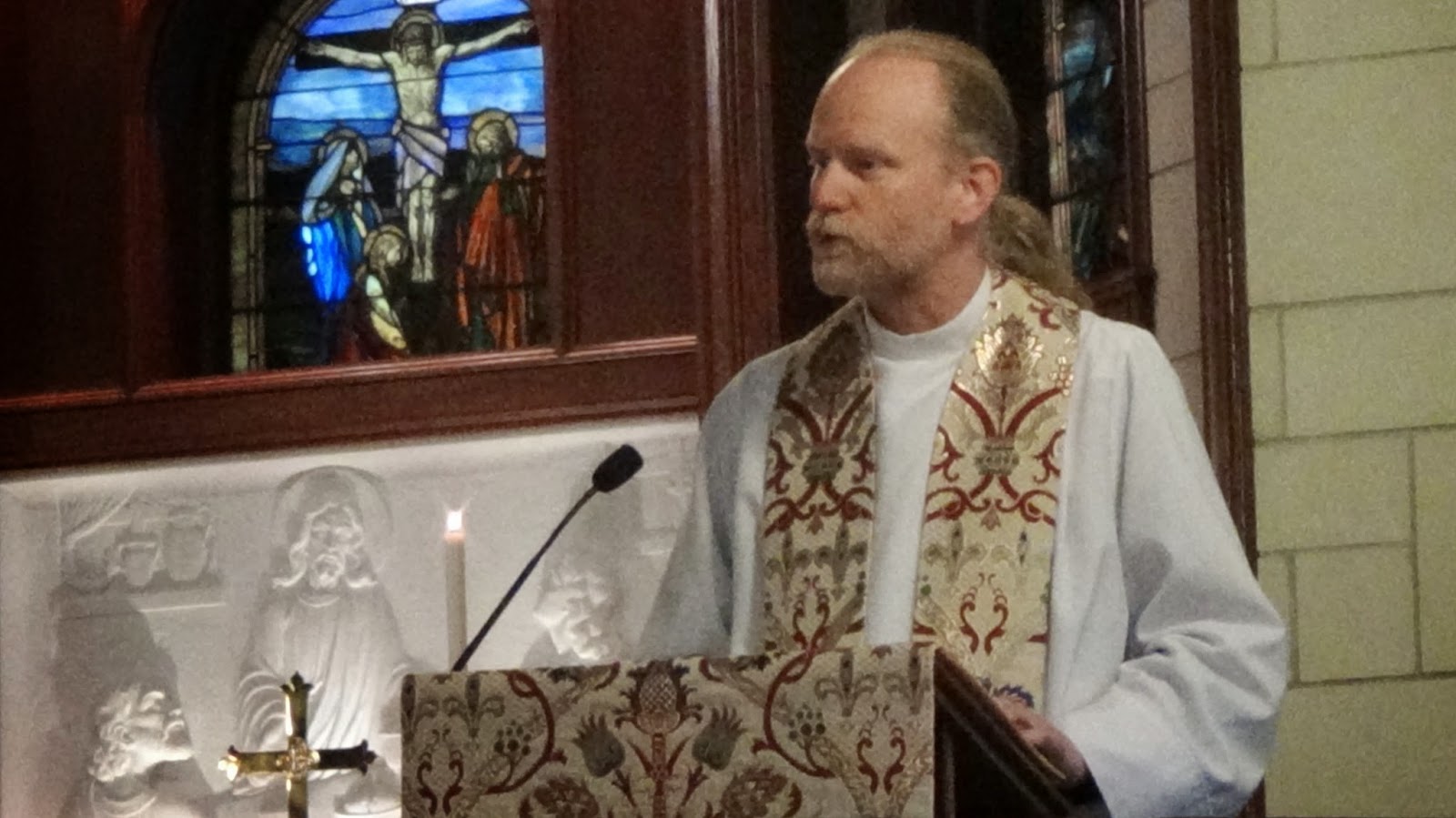 “You Are Witnesses of These Things”
If you weren’t here last week, I am sorry to say that you missed out on a wonderful sermon that was delivered by our guest preacher, Don Compier, who is the dean of the Bishop Kemper School for Ministry and who also serves a Spanish-speaking congregation in Kansas City. In his sermon, Don spoke passionately about what it means for us to be witnesses of the Resurrection. Today I want to return to that theme.
Following his resurrection on Easter morning, Jesus appeared to his disciples for a period of forty days until he was taken up into heaven. One of these appearances occurred on the evening of Easter Sunday. Two of his followers had just returned to Jerusalem, and they were telling the other disciples how they had been encountered by Jesus on the road to Emmaus and how Jesus had made himself known to them in the breaking of the bread. (This recognition scene is the subject of the relief that stands above and behind our altar here at St. John’s.)
Anyway, while these two disciples are excitedly telling their story, Jesus suddenly appears in their midst. The disciples are all surprised, to say the least. Some are downright terrified because they think they are seeing a ghost. Jesus tries to alleviate their fear by pointing to the holes in his hands and feet. He says, “Touch me and see; for a ghost does not have flesh and bones as you see that I have” (Luke 24:39). And just to make sure that he has left no room left for doubt, the Risen Jesus takes a piece of broiled fish and eats in their presence.

These are my words that I spoke to you while I was still with you—that everything written about me in the law of Moses, the prophets, and the psalms must be fulfilled…. Thus it is written, that the Messiah is to suffer and to rise from the dead on the third day, and that repentance and forgiveness of sins is to be proclaimed in his name to all nations, beginning from Jerusalem. You are witnesses of these things” (Luke 24:44–48).

As Don pointed out last week, in the gospels, when Jesus is talking to his disciples, he is generally talking to us as well. So when Jesus says, “You are witnesses of these things,” he is talking to you and me. We are witnesses of these things. Of course, we are not eye-witnesses like his first followers were, but we are witnesses, nonetheless, called to testify about those things that have been passed down to us.
What things exactly? Well, Jesus specifically mentions three. We are to bear witness to the fact that Jesus suffered and died for us, that God raised him from the dead, and that repentance and forgiveness of sins has been made possible through his death and resurrection.
Now it would be worthwhile to spend some time reflecting on each of these things which we are witnesses of, but Don touched on this last week. So instead of talking about what we are called to bear witness to, I want to talk about whom we are called to bear witness to.

“You Will Be My Witnesses… to the Ends of the Earth”
In the Book of Acts, right before the Risen Jesus ascends into heaven, he tells his disciples, “Hang out in Jerusalem for a while…. You will receive power when the Holy Spirit comes you; and you will be my witnesses in Jerusalem, in all Judea and Samaria, and to the ends of the earth” (Acts 1:4, 8). Notice the progression. The disciples are to start right where they are in Jerusalem, then they are to spread out in ever-widening circles, first to Judea, then to Samaria, and finally they are called and equipped to take the gospel to the ends of the earth. But who all does that include?

But why? Why is the gospel about Jesus of Nazareth to be proclaimed to all nations and all faiths? Because Jesus isn’t just a human leader of one of the world’s religions. He is the King of kings, and the Lord of lords. As Jesus himself said following his resurrection, “All authority in heaven and on earth has been given to me. Go, therefore, and make disciples of all nations (Matt 28:18). But, how did Jesus acquire all authority? Well, we might say that he always had it. As the incarnate Son of God, through whom all things came into being, we could say that Jesus is Lord by nature, and that would  certainly be true. But the New Testament goes further than this. Across the board, the writings of the New Testament connect Jesus’ being Lord to his humble act of self-sacrifice on the cross.
For example, in his letter to the Philippians, Paul says of Jesus:

God also highly exalted him
and gave him the name that is above every name,
so that at the name of Jesus every knee should bend,
in heaven and on earth and under the earth,and every tongue should confess that Jesus Christ is Lord,
to the glory of God the Father (Phil 2:9–11).

But why did God exalt Jesus in this extraordinary manner? Because Jesus, even though he was very God of very God, he became like a slave and “he humbled himself and became obedient to the point of death—even death on a cross” (Phil 2:8).
In the Book of Revelation, we find this same connection between Jesus’ death and lordship. In chapter 5, Jesus is worshipped by the whole host of heaven just like God is. Night and day they sing without ceasing, “You are worthy… for you were slaughtered and by your blood you ransomed for God saints from every tribe and language and people and nation” (Rev 5:9). Jesus is worthy to receive worship because of his death.
Now I could offer up example after example of how Jesus’ lordship is grounded in his act of self-sacrifice. The Bible is filled with them, but the simple truth we need to hear is this: Jesus is Lord of all people because he is the Savior of all people. Lord and Savior are two sides of the same coin; we cannot have one without the other. By giving up his life, Jesus rescued the whole world from enslaving powers of sin and death, and so all people everywhere owe him their undivided gratitude and allegiance.
But the whole world does not yet know the good news about Jesus. In today’s gospel Jesus says, “I have other sheep that do not belong to this fold.” These other sheep are sheep from other nations, sheep from other faiths. For God’s vision for creation is to fashion out of all the diverse peoples of the world… one single flock of humanity… under the loving care and guidance of one Shepherd, the Good Shepherd who laid his life down for all sheep everywhere.
“I have other sheep,” says Jesus, “and I must bring these sheep in.” Jesus brings these other sheep in, by sending us out. Jesus calls and equips his followers to shine the light of his salvation into every corner of creation, into the dark recesses of every human heart. Jesus died that we all might know the redeeming love and forgiveness of God. And he was raised from the dead that all people everywhere might be reconciled to God and to one another. We are witnesses to all these things.

“We Have This Treasure in Clay Jars”
Or, to draw upon another image, we are ambassadors for Christ. As Paul writes to the Christians in Corinth:

[God has] reconciled us to himself through Christ, and has given us the ministry of reconciliation, [which is this]; that in Christ God was reconciling the world to himself, not counting their trespasses against them, and [God has] entrusted this message of reconciliation to us. So we are ambassadors for Christ, since God is making his appeal through us (5:18–20).

But who are we that God should make his appeal through us to the rest of the world? Wouldn’t it be presumptuous of us to think of ourselves as ambassadors for Christ? In fact, isn’t it arrogant for Christians to claim that Jesus is the Lord and Savior of all people, especially in our ever-increasing global and multicultural world? These are important questions, and I wish I had time to address them adequately, but let me sketch out an initial response.
In the past and in the present, we Christians have at times been presumptuous and arrogant. And I dare say, we will be guilty of such things in the future. But, let’s be clear, these things are not inherent in the gospel that we have been entrusted with. You see, messengers are not to speak their own words, only the words that they have been given to speak. And ambassadors do not represent themselves, but the one who sent them. As Paul makes clear, we Christians
do not proclaim ourselves; we proclaim Jesus Christ as Lord and ourselves as your slaves for Jesus’ sake. For it is the God who said, “Let light shine out of darkness,” who has shone in our hearts to give the light of the knowledge of the glory of God in the face of Jesus Christ. But we have this treasure in clay jars, so that it may be made clear that this extraordinary power belongs to God and does not come from us (2 Cor 4:5–7).
“We have this treasure in clay jars.” What an incredibly important and powerful image, for it holds together the twin virtues that we Christians must cultivate, the twin virtues of faith and humility. According to Parker Palmer, “The spiritual life is lived in a balance of paradoxes, and the humility that enables us to hear the truth of others must stand in creative tension with the faith that empowers us to speak our own.”
Christians do not have a monopoly on truth. All truth is God’s truth, even when that truth is found in other faiths. As Christians who have been called to go out into the world as witnesses and ambassadors of Christ, we can with good conscience enter into genuine dialog with persons of other faiths. We can listen and seek to understand them; we can acknowledge the truth that they have been given. In so doing, we are exercising the humility of the Lord Jesus Christ.
But we cannot stop there. Along with humility, we must also exercise the virtue of faith. We must, through our actions and through our words, bear witness to the treasure that we have been entrusted with, namely, that in Jesus, God was reconciling the world to himself and that “there is salvation in no one else, for there is no other name under heaven given among mortals by which we must be saved.” Again, we Christians do not have a monopoly on the truth, but we, by God’s wisdom and grace, have been made stewards of a truth that is for the salvation of the whole world. And so we must be faithful stewards.
We are clay vessels, to be sure, and that calls for all humility. But we have been given a treasure that is not of our own making, and so it is not ours to hoard. We have been called by God; we have been equipped with the Holy Spirit. And so with all faith, let us share the treasure of the good news of Jesus Christ with the whole world, which God so dearly loves.

In the name of the Father and the Son and the Holy Spirit. Amen.

Email ThisBlogThis!Share to TwitterShare to FacebookShare to Pinterest
Labels: Sermon