He Bore the Cross of My Shame — Good Friday Sermon 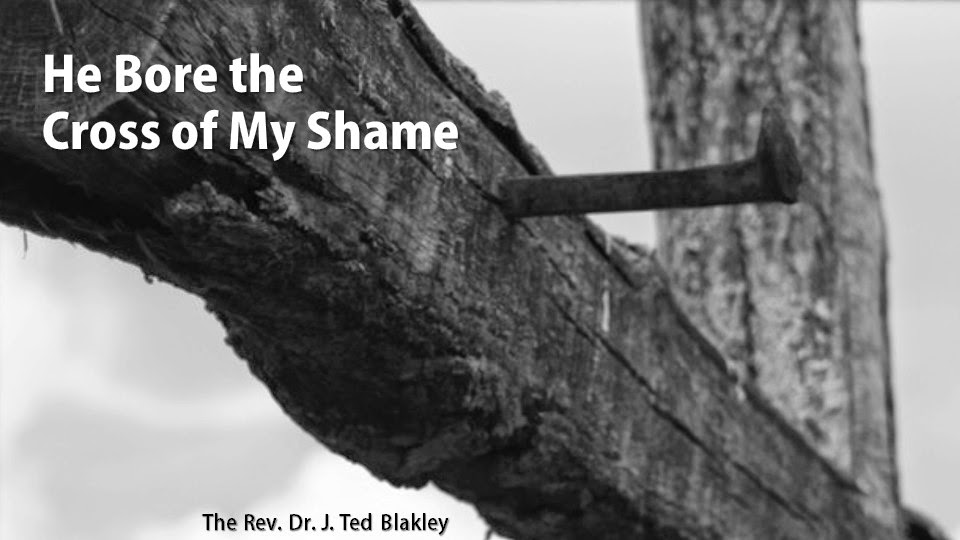 When Adam and Eve ate from the Tree of the Knowledge of Good and Evil, they were overcome by such a deep sense of shame that all they could do was hide themselves from one another and from God. The real tragedy is that they—and all of their unborn children, that is, we—no longer experienced God's presence as a blessing, but as a curse.
From that moment, God has worked to restore humanity, to set it free from its original shame and all of the sin, violence, and death that have resulted. This work climaxes on Good Friday where God cures like with like, where God cures our shame by enduring shame.

An audio file can be found here.

Stories of Shame
On Tuesday, I was in Topeka at the annual Chrism Mass, where the priests and deacons and the Bishop gather together to renew our ordination vows. After the service, we had lunch. And I sat down next to one of my colleagues who was talking about his Holy Week sermons. He said, “This year, I am not going to be talking about shame and guilt.” That made may me a bit nervous because that’s all I had been planning to talk about. My friend said he wasn’t going to heap shame and guilt upon his congregation by preaching about how they were the cause of Jesus’ death. Well, I am not planning to do that either. But we’ve got to talk about guilt and shame, for without them we simply can’t make sense of Jesus’ death.

So, tonight, I want to talk about shame. More specifically, I want to talk about “original shame,” which is related to the idea of “original sin,” but which is far more fundamental to our human situation and far more relevant to our daily lives. But I must warn you, tonight’s sermon is only the first part of the story, you will have to come back on Easter Sunday to get the Rest of the Story. Tonight, we will look at three stories of shame.

Story Of Shame #1:  Adam and Eve
The first story of shame is an old story, a very older story. It’s the story of the first man and the first woman, the story of Adam and Eve. You know this story. In the beginning, God plants a garden in Eden, and it needs tending. So God creates Adam from the dust of the ground, and places him in the garden to till it and keep it. Later God creates Eve to be Adam’s partner in this work. They are the perfect couple, ideally suited for one another. And so, life in the Garden of Eden is idyllic. There is plenty of food, there is meaningful work, and “they are naked and not ashamed.”

But turn the page, and things fall apart rather quickly. The crafty serpent convinces our first parents to eat from the one tree in the entire garden that is off limits to them, the Tree of the Knowledge of Good and Evil. And when they partake of the forbidden tree, everything changes. In an instant, their eyes are opened, and they now know that they are naked. Shame washes over them to such a degree that they can no longer bear to be in one another’s presence. They try hiding themselves from one another, but the best they can do is fashion some makeshift clothing out of fig leaves.

That’s what shame does. Shame causes us to hide ourselves from other people, and so cuts us off from one another. And when we are disconnected from others, we are prone to all manner of sin and violence. Even brothers will kill one another when they are disconnected and operating from a place of shame. In short, shame brings about a kind of death, wherein we are separated from ourselves, from others, and especially from God. That’s the next part of the story.


So after this incident, Adam and Eve hear the Lord on his evening stroll through the garden, and they hide themselves. The Lord calls out, “Where are you?,” (curious tone of voice), and Adam replies, “I heard the sound of you in the garden, and I was afraid because I was naked, and I hid myself” (3:10). The Lord puts two and two together, and realizes that his children have eaten from the tree he had warned them about. And look what has become of them. They are so overcome, so awash with shame, that they cannot bear to be in God’s presence.

And let’s be really clear about this. Shame is the culprit. Shame did this, not God. Adam and Eve aren’t hiding from God because God punished them. They aren’t hiding from God because God is angry with them. After all, notice how this story plays out. When God arrives on the scene, he doesn’t even know anything has happened. It’s not until Adam explains why they are in hiding that God learns of their disobedience. In other words, God didn’t discover their disobedience and then come storming through the garden bellowing, “Where are you? Show yourselves! Didn’t I tell you not to eat from that tree!” Nor did God catch them in act of disobedience. We all know what that feels like—the sudden shock, shame, and fear that washes over us when we are caught doing something we know we shouldn’t be doing. No, the shame that Adam and Eve felt was of a different sort; it was deeper than embarrassment, more profound than a guilty conscience.

I don’t know what it was about the Tree of the Knowledge of Good and Evil that did this to them, but whatever was in the meat of that fruit, it overwhelmed our first parents. They were made so acutely aware of their nakedness that all they could to do was hide in order to preserve their dignity and sense of self-worth. Human companionship was no longer a source of comfort. And God’s presence was no longer a blessing, but a curse. This is original shame. This is the state of affairs that gets passed down from generation to generation. We all experience it; we all are subject to it, even when we ourselves haven’t done anything wrong to warrant shame.

Story Of Shame #2:  Two Boys
Take, for example, this story. During my junior year at Friends University, I lived just off campus in a small, one-room apartment, located above a detached garage. The garage belonged to a family who went to my church. Their son was in the middle-school youth group, where I served as one of the adult sponsors. There was another boy in the youth group who lived a few blocks away. One evening, my doorbell rang. And when I opened the door, I saw these two boys standing there, on the verge of tears. I invited them upstairs where they told me this story.

They had just been walking around the neighborhood, when they were suddenly surrounded by a group of rough-looking boys who lived in a boys’ home in our neighborhood. They were older, stronger, and more numerous, so there was nothing that these two boys could have done. They were taunted, made fun of, and punched a few times. I don’t think they sustained any bodily injuries. Nevertheless, it was a traumatic experience for both of them. They were scared and ashamed. That’s what struck me the most. They hadn’t done anything wrong, wrong had been done to them. They were the victims, yet it was they who felt ashamed. So ashamed that they couldn’t even look at each other as they were telling me their story. This shared experience didn’t draw them closer together, it pushed them apart. The presence of the other wasn’t a source of comfort, only a reminder of what had been done to them, a reminder of how weak, powerless, and afraid they had been. They might as well have been naked, because that is how they felt. That’s what shame does.

Shame vs. guilt
Brené Brown is a researcher professor who studies vulnerability, worthiness, and shame, and she makes a helpful distinction between guilt—which is healthy—and shame—which is toxic. Guilt says, “I did something bad,” while shame says, “I am bad.” Guilt says, “I made a mistake,” while shame says, “I am a mistake.” A guilty conscience says, “Look what you did.” But the gremlins of shame whisper, “You are never going to be good enough. Who do you think you are?”

Shame causes us to question our worth and our identity. Shame makes us feel exposed. Shame makes us feel vulnerable to ridicule and rejection. And so shame teaches us to hide ourselves from others and from God. So when we are operating out of shame, we construct a false identity, we project a false self, one that we hope will make us worthy of love and acceptance. But it never works because we know—or at least we believe—that any love we receive has been built on a lie. And so, we keep up the game as long as we can, but it is a game that we can never win because it has no winners.

Story Of Shame #3:  God
So what was God to do? You see the dilemma, don’t you. We are broken, we are sick, and we are in need of God’s healing touch. But when God gets close enough to heal us we feel too exposed. Our shame is triggered, and we go into hiding. Yet, God is not content to wait until his children make it back home; indeed they cannot. Instead God leaves behind his respect and his dignity, and he goes into the far country seeking out his prodigal sons and daughters. But he can’t be seen less we run away.

So what does God do? God comes to us disguised in weakness, in human weakness. In the incarnation of his beloved Son, God strips himself of his radiant glory and puts on the cloak of our fallen humanity. God comes into the world naked and exposed, crying like a baby and placed in a wooden manger, the infant son of Mary. He exits the world in the same fashion, nailed to the hard wood of a Roman cross, naked and exposed with a cry of God-forsakenness on his lips. God cured like with like; he healed shame with shame.

And so, tonight, as we venerate the cross of Christ, let us remember that this is God’s story of shame and our story of our salvation.


In the name of the Father and the Son and the Holy Spirit. Amen.