Paying Tribute to the King of Kings: Living Lives of Gratitude in the Kingdom of God's Grace 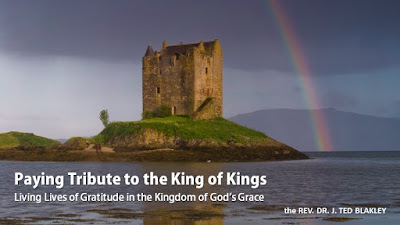 You Don’t Vote for Kings
Today is the last Sunday of the Christian Year, which means… that next Sunday is the beginning of Advent. Today is also Christ the King Sunday because on this day we celebrate the fact that Jesus is a king, and not just a king, but the King, the one to whom God has given all authority on heaven and on earth. And if Jesus is King, then we are his subjects. Now this isn’t language that we are accustomed to using. After all, we live in a democratic society, so we don’t really know what it means to live as subjects to a king. Our leaders don’t ascend to a throne without our say; we vote for them.

How Did You Become King, Then?
This reminds me of a scene from the movie, Monty Python and the Holy Grail. In this British comedy, King Arthur has set out on his quest for the Holy Grail, and he comes upon an unknown castle. So he asks a couple of the local peasants, “What knight lives in that castle over there?” The man and woman do a lot of talking, but they don’t answer his question. So Arthur gets impatient and begins to shout, “Be quiet! I order you to be quiet!” Taken aback, the woman responds, “Order, eh? Who does he think he is?” 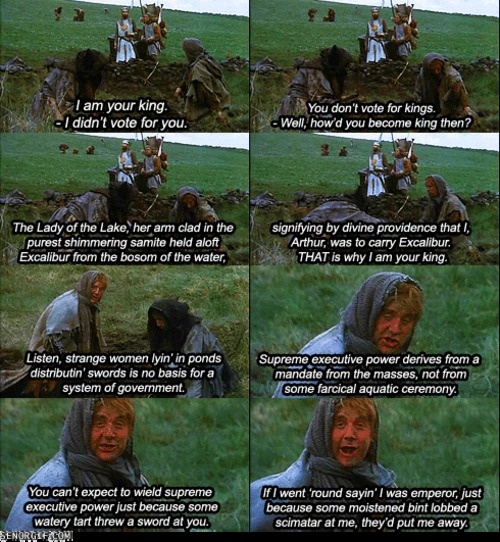 Becoming the King of Kings
According to the Revelation that was given to John in a vision, Jesus is “the ruler of the kings of the earth,” because he sacrificed himself in order to rescue humanity from all the forces that enslave it. As we heard read today, out of his great love for us, Jesus “freed us from our sins by his blood and made us to be a kingdom, priests serving his God and Father” (1:5–6). In chapters 4 and 5, the book of Revelation paints this picture on a much grander scale. In chapter 4, we are ushered into the heavenly throne room with John, where we behold the One who is seated upon the throne; it’s God in all of God’s glory. Around the throne are twenty-four elders and four living creatures, and they praise God day and night without ceasing. They sing:

Holy, holy, holy, the Lord God the Almighty,     who was and is and is to come….You are worthy, our Lord and God,     to receive glory and honor and power,
for you created all things,
and by your will they existed and were created (4:8, 11).

If this sounds familiar, it’s because we say similar words every week when we meet together at the Lord’s table to celebrate the Lord’s supper. You see, the worship we do in this place on Wednesdays and Sundays is not something that we create, it’s something we participate in. Whenever we worship God, we are not worshipping on our own. Rather, we are joining our voices with “Angels and Archangels and all the company of heaven,” who are forever giving God the glory and honor and thanks due to his Name.

But it isn’t just God the Creator who is worthy of such devotion. As the chapter opens, the One seated upon the throne has a scroll in his right hand. This scroll is sealed with seven seals, and it contains the secret of how God will finally bring the whole world to repentance and faith. An angel shouts, “Who is worthy to open the scroll and break its seals?” In all of heaven, none is found worthy,… save one. Suddenly the spotlight shifts and reveals a lone figure next to the throne. It is a Lamb standing as if it had been slaughtered. The Lamb goes and takes the scroll, at which point, the twenty-four elders and the four living creatures fall before the Lamb and begin to sing a new song:

You are worthy to take the scroll
and open its seals,
for you were slaughtered and by your blood you ransomed for God
saints from every tribe and language and people and nation;
you have made them to be a kingdom and priests serving our God,          and they will reign on earth (5:9–10).

Suddenly the whole host of heaven join the four living creatures and the twenty-four elders. They number “myriads of myriads and thousands of thousands.” Full of joy and in full voice, they sing,

Worthy is the Lamb that was slaughtered to receive
power and wealth and wisdom and might
and honor and glory and blessing!

And as if that were not enough, “every creature in heaven and on earth and under the earth and in the sea,” also joins in the heavenly chorus:

To the One seated upon the throne and to the Lamb.Be blessing and honor and glory and might forever and ever.

Paying Tribute to the King of Kings
Jesus rescued people from every “tribe, language, people, and nation,” and he is still doing it. Jesus laid his life down to set us free from the forces that oppress and enslave us… from the power of sin and death, the power of violence and shame, and anything else that keeps us from living lives full of grace. Jesus became our king, not by conquering us, but by defeating our enemies. THAT is why he is our King.

And we don’t offer our tribute out of any compulsion or sense of duty. We offer it freely out of gratitude. Grace begets gratitude; so gratitude is the most appropriate response that we can make as recipients of God’s grace. And so, I have another assignment for us. In the minute of silence that follows the sermon, think of something in your life that God has done for you, perhaps something that God has rescued you from or set you free from. And then think of a way to pay tribute, to express your gratitude for what Jesus has done to give you life. You could write a thank-you note to Jesus. You could tell someone a story of when God’s grace has amazed you. You could pay it forward by helping someone in need during this Thanksgiving season. But find some specific, concrete way to give thanks for the grace you have been shown.

In the name of the Father and the Son and the Holy Spirit. Amen.
Posted by Unknown at 10:15 AM