Encyclopedia Brown and the Case of the Leftover Loaves: A Markan Mystery

The Strange Exchange Between Jesus and the Syrophoenician Woman (Mark 7:24–30).

What did Jesus mean when when he said, "Let the children be fed first, it isn't right to take the children's bread and throw it to the dogs." And what was the Syrophoenician woman referring to when she talked about the dogs eating children's crumbs under the table? And how do the disciples fit into it all, the same disciples who earlier didn't understand about the loaves? Follow the trail of breadcrumbs and see if you can solve the mystery before Encyclopedia does.

Encyclopedia Brown and the Mystery of the Kingdom 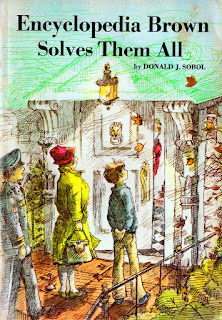 In the evenings, I like to read to the kids while they are eating at the dinner table. Recently, I have been reading them stories from the Encyclopedia Brown series. If you don’t know these stories, Encyclopedia Brown is a boy detective. His real name is Leroy, but most people call him Encyclopedia because he is so smart. His dad is the police chief in fictional Idaville, and so sometimes Encyclopedia helps him solve crimes that have stumped the police. But mostly, he solves cases around his neighborhood. There are two things I like about these stories. First, they are short. And second, each story provides all of the clues that readers need to solve the mystery on their own. Sometimes the clues are obvious. But sometimes you have to reread the story a couple of times before you figure it out. And sometimes, you just have to look up the answers in the back of the book. This technique makes the reader more active, more engaged, more involved in the story.
The Gospel of Mark does something quite similar. Mark is also a mystery story. It is a mystery about the kingdom of God, set in the small backwater region of Galilee on the outskirts of the great Roman Empire. At the center of this mystery is an obscure Jew, named Jesus. And everybody in the story is trying to figure out who he is and where he gets his power and authority to preach, to exorcise demons, to pronounce forgiveness, to heal the sick, and to do a host of other things. Now Mark has left his readers clues to help them discover for themselves the true nature of Jesus’ identity and mission. Some of the clues are obvious; others not so much. Sometimes Mark’s stories about Jesus make sense to us on the first reading, and sometimes we have to go back and read them over and over again, pondering them in our hearts and minds. And  sometimes we wish we could just look up the answers in the back of the book.[1]


There are all sorts of things that don’t make sense. After last week’s debate with the Pharisees, Jesus leaves his Jewish homeland, and heads north into Gentile territory. For some reason he tries to remain hidden out of the public eye, but it doesn’t work. A desperate woman seeks him out. And when she finds him, she falls down at his feet, and begs him to heal her daughter. Jesus responds with, “Let the children be satisfied first, for it is not fair to take the children’s bread and throw it to the dogs.”
Wow! That’s a pretty shocking response from Jesus!... We are nearly halfway through the gospel, and not once has Jesus ever refused to heal anybody who has come to him, not least a parent seeking healing for a child. It wasn’t that long ago when Jairus fell down at Jesus’ feet and begged him to come and heal his daughter. And Jesus went with Jairus immediately. So why does Jesus presumably refuse to heal this woman’s daughter? The most obvious explanation is that she is a Gentile. After all, Mark emphasizes her ethnic and racial identity. He doesn’t give us her name, instead he says, “Now the woman was a Gentile, of Syrophoenician origin.” Moreover, Jesus clearly casts the woman and her daughter as dogs, just as assuredly as he casts the Jews as the children. “Let the children—[the Jews]—be satisfied first, for it is not fair to take the children’s bread and throw it to the dogs—[that is, Gentiles].”
Some commentators argue that this shows that Jesus had a prejudice against Gentiles, and that this Gentile woman confronted him about it and he had a change of heart. It is an interesting idea, but the evidence just doesn’t support it. For example, prior to his encounter with the Syrophoenician woman, Jesus has healed Gentiles on at least two separate occasions. First, in chapter 3, when Jesus’ popularity was on the rise, crowds of people traveled to Galilee from all over. They listened to him proclaim the good news of the kingdom, and they were healed by him. Some of the crowds came from Jewish regions, but others came from the Gentile regions of Tyre and Sidon, which is where today’s episode occurs. Then, in chapter 5, Jesus crossed the Sea of Galilee, and exorcised the Gerasene demoniac, the man who was possessed by Legion. So Jesus healed a Gentile in Gentile territory. Moreover, in chapter 6, Jesus sent his own disciples on a Gentile mission. They resisted, but he did send them. So none of this sounds like a man who has a prejudice against Gentiles. But it still leaves us with a mystery. How do we explain Jesus’ very uncharacteristic response to this very desperate woman?

Following The Breadcrumb Trail
Well we need to reread some earlier portions of Mark. We need to get out our magnifying glasses and comb through Mark’s narrative looking for clues. And the first set of clues occurs in the exchange between Jesus and the woman. In your bulletin, you will notice that Jesus says, “it is not fair to take the children’s food and throw it to the dogs.” A better translation would be, “it is not fair to take the children’s bread—or the children’s loaf—and throw it to the dogs.” And notice, how the woman responds, “Yes, Lord, yet even the dogs under the table are eating the children’s crumbs.” Bread, loaf, crumbs. Does it remind you of anything?
For the past four weeks, we have been reading straight through the Gospel of Mark, and the word loaf or loaves has appeared at least once each and every week. Mark has literally left us a breadcrumb trail, and he expects us to follow it because it holds the key to solving today’s mystery.
The trail of breadcrumbs began with the miraculous feeding of the five thousand, where Jesus fed five thousand Jews with just five loaves and two fish. After everyone had their fill, the disciples picked up twelve basketfuls of loaf fragments,… crumbs, if you will. Immediately, Jesus forced his disciples into the boat, and told them cross over to Bethsaida, which is in Gentile territory. He was sending them on a Gentile mission. But they resisted, which Mark symbolizes in their failure to make any headway against an adverse wind. So Jesus came to them walking upon the Sea in an attempt to reveal himself as the Lord, as the One with the divine authority to send them on such a mission. But his attempt fails. His disciples don’t recognize him; they are simply terrified. Mark explains their reaction this way: “They were utterly astounded, for they did not understand about the loaves, but their hearts were hardened” (6:52). They didn’t understand about the loaves because their hearts were hardened. This is such a confusing explanation, but ironically it is directly relates to the even stranger exchange between Jesus and the Syrophoenician woman.

In the name of the Father and the Son and the Holy Spirit. Amen.


[1] Actually, in a way we can look up the answer in the back of the book. For Mark, the answer about Jesus' identity is found in the crucifixion scene.
Posted by Unknown at 10:30 AM