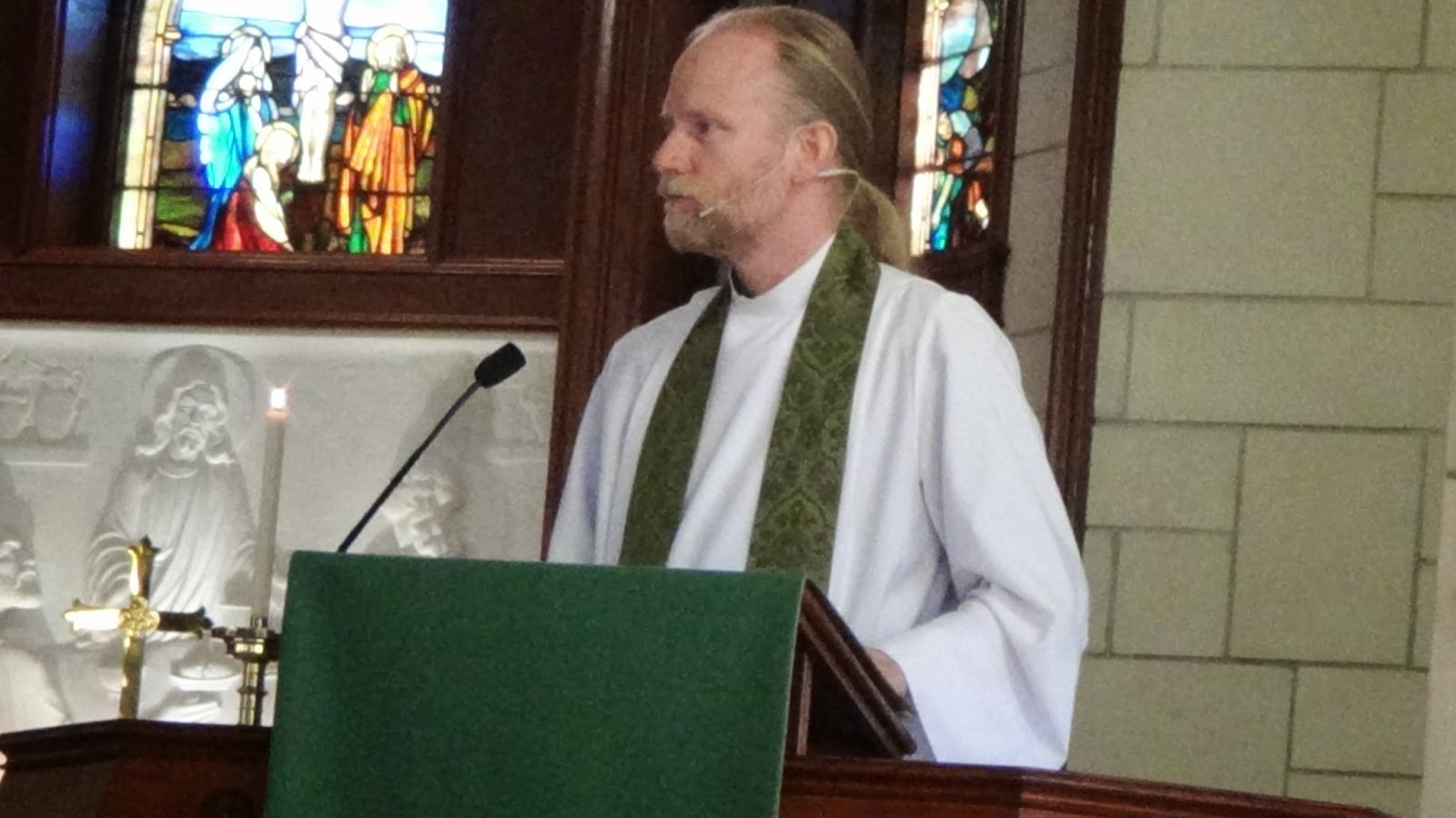 Two weeks ago, I began my sermon on Moses and the Golden Calf by talking about the game show, To Tell the Truth. This past week, I went back to the same well. And so, I shall begin today’s sermon by talking about another game show I remember watching as a kid, called The $100,000 Name That Tune. Does anybody remember it?
Name That Tune was a syndicated game show that aired during the latter half of the 1970s. Each week, two contestants from the studio audience would be chosen to compete against one another in a series of challenges, where they had to name the title of songs. The challenge I remember most was called Bid-a-Note. During this segment of the show, the host, Tom Kennedy, would read a clue about a song, and the two contestants would take turns bidding against one another for the chance to identify the title of the song.

At that point, the first three notes of the song would be played on a piano, and the winning bidder would try to Name That Tune.

Now I mention this because in Jesus’ day, the Jewish rabbis played a similar game. Let’s call it, Name That Commandment. In this “game,” rabbis would discuss and debate the Law, all in an effort to understand God’s law more fully and to live into it more faithfully. One of the questions they would pose to one another was, “What is the most important of God’s commandments, the commandment that serves as a the starting point or as the summary of the whole Law?” How a rabbi answered this question would reveal something about his theological tendencies and/or his political leanings.
We have some evidence of these rabbinical debates around the time of Jesus. Some rabbis argued that the heart of the law was contained in a statement from the minor prophet Habakkuk, “The righteous will live by faith” (Hab 2:4). This is a particularly interesting answer because in his letters to the Romans and to the Galatians, the Apostle Paul—who himself was trained as a rabbi—identifies this verse as the foundation of the Christian gospel (Rom 1:17; Gal 3:11; cf. Heb 10:38).

In any case, in today’s gospel, Jesus himself gets drawn into this debate by the Pharisees. “Teacher, which commandment in the law is the greatest?” (Matt 22:36). Now before we look at Jesus’ answer, let me provide some context, a bit of the background and the setting.
Jesus is asked this question, while he is standing in the temple in Jerusalem, the religious and political center of first-century Judaism. Jesus has been teaching crowds of Jewish pilgrims who have journeyed to Jerusalem to celebrate the feast of Passover, arguably the central celebration of the Jewish nation. In two days, Jesus would be dead.
At the beginning of the week, Jesus had ridden into the city on the back of a donkey in a symbolic royal procession. Jesus then engaged in a prophetic demonstration in the temple. He disrupted temple activities by overturning the tables of the money changers and driving out all those who were buying and selling in the temple precincts. Then, each and every day afterwards, Jesus returned to the temple to speak to the crowds.
This did not sit well with the religious and political establishments. The chief priests, the Pharisees, and other leaders challenged Jesus, questioning his authority. “By what authority are you doing these things, and who gave you this authority?” (Matt 21:23).  Jesus, however, refused to answer their questions. And instead he told parables that served to question their authority. As Matthew says, “When the chief priests and the Pharisees heard his parables, they realized that he was speaking about them. They wanted to arrest him, but they feared the crowds, because they regarded him as a prophet.” (Matt 21:45-46). So the Pharisees hatched a plot to entrap Jesus in what he said.
We saw this in last week’s gospel reading. You may recall that the Pharisees and the Herodians approached Jesus in the temple, and asked him: “Is it lawful to pay taxes to the emperor, or not?” (Matt 22:17). It’s a politically explosive question? If Jesus were to say, “Yes, it is lawful to pay taxes to the emperor of Rome, the empire that is currently occupying and oppressing the Jewish nation, then Jesus will fall out of favor with the crowds. If, on the other hand, Jesus were to say, “No, it is not lawful to pay taxes to Rome,” then he could be arrested by the Roman authorities for inciting rebellion. Of course, Jesus side-stepped their trap with his ambiguous response: “Give to Caesar what is Caesar’s, and give to God what is God’s” (Matt 22:).
After this failed attempt to entrap Jesus, the Pharisees withdraw, and the Sadducees take a shot at him by questioning Jesus’ belief in the resurrection of the dead. Jesus’ response silences the Sadducees, and so in today’s reading, the Pharisees are back at it: “Teacher, which commandment in the law is the greatest?” Now, I am not exactly sure what the Pharisees are hoping that Jesus will say that they could use against him. In any case, Jesus answers their question, not with one commandment, but with two:

Both of these commandments come straight out of the Old Testament. The first is taken from Deuteronomy 6:4–5. Israel is given this commandment while they are encamped along the eastern banks of the Jordan River. They have just completed their forty-year sojourn in the wilderness, following their Exodus from Egypt, and they are looking over Jordan into the Promised Land. Moses will not be accompanying the Israelites into the Promised Land. So he leaves them, as it were, with his last will and testament:

The land of Canaan, which the Lord was giving to them, was a land in which other so-called gods were worshipped “on every high hill and under every green tree” (1 Kings 14:23). And so, Moses reminds Israel that they have only one God. That being the case, the Israelites were to pledge their sole allegiance to the Lord. They could have no divided loyalties where the Lord was concerned; they were allowed no other pledges of allegiance, be it, to a god, to a person, or to a nation. Instead, they were to love the Lord their God with all that they were, all that they had, and all that they ever hoped to be.[1]

So what does it look like to love God with the all of our heart, soul, mind and strength (Mark 12:30)? There is a lot that could be said here for there is no end to all of the ways that we can love God with singular devotion, but Jesus gives us an important clue when he quickly adds a second commandment, which he takes straight from Leviticus 19:18. “You shall not take vengeance or bear a grudge against any of your people, but you shall love your neighbor as yourself: I am the Lord.” … ‘You shall love your neighbor as yourself: I am the Lord.’
And so, loving God looks like loving our neighbor. We know this, of course. After all, it’s built right into the Ten Commandments. The first four commandments offer some specifics about how we are called to love God, and the last six commandments offer specifics about how we are called to love our neighbor. Love of God always comes first, but if it is truly the love of God, then it manifests itself as the love of neighbor. “And who is my neighbor?” a teacher of the law asks Jesus one day. The short answer is, “Anybody whom God loves; anybody whom Jesus, the Son of God, died for.” At last count, that includes everybody. Our family, our friends. Anybody that God brings into our lives, be they strangers or enemies.
Love of neighbor flows directly from love of God. That’s why the Apostle Paul can write in Galatians:

“For the whole law is summed up in a single commandment,
‘You shall love your neighbor as yourself’” (Gal 5:13).

Did Paul not get the memo? Doesn’t he know that there are two great commandments, not just one? Indeed, he does, but he knows that there is no genuine love for God where there is no concrete expression of love for those whom God loves.

Let me end with a story about a young man I met on Wednesday night.
(This story is related on the video of the sermon).

In the end, what the young man needed was God. But how does a person find God in this world? Through God’s word and through God’s people. Every day, we are called to live into our twin vocations of loving God and loving people. And this is not always easy; in fact, it is often very hard, for a variety of reasons.  But let us never think that love of God and love of neighbor are somehow in competition with one another. When there is any doubt, let us love our neighbors because in doing so we will find ourselves fulfilling the call to love God with all of our heart, soul, strength, and mind. 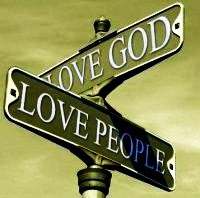 [1] So important was this call to love God fully with singular devotion that Moses continued: “Keep these words that I am commanding you today in your heart. Recite them to your children and talk about them when you are at home and when you are away, when you lie down and when you rise. Bind them as a sign on your hand, fix them as an emblem on your forehead, and write them on the doorposts of your house and on your gates” (DEUT 6:6–9).